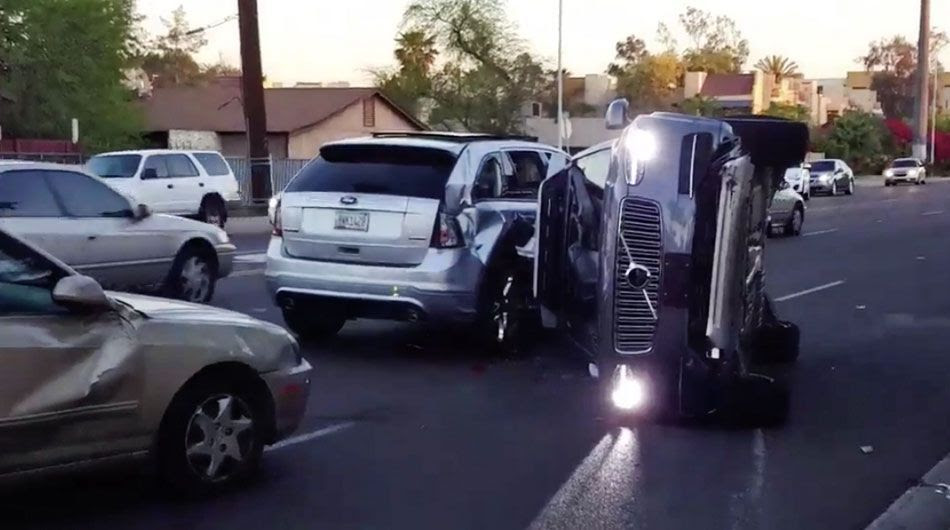 The future is here! As you may know, yet another self-driving robo car was involved in a real-life crash. This time, it was an Uber car involved a collision on Friday, March 24 in Tempe, Arizona. According to the NY Times, the impact of the the crash caused the vehicle to roll over onto its side…ouch! The Uber car was in self-drive mode at the time of the crash, but was not found to be the cause of the car accident according to a Tempe Police Dept. spokesperson. “Uber’s Volvo XC90 sport utility vehicle was hit when the driver of another car failed to yield” the officer said…It is noteworthy, however, the self-driving car could not avoid or anticipate the collision. Artificial intelligence (AI) anyone?

Can you imagine self driving Google or Uber cars rolling down Atlantic Ave in Delray Beach? Or what about Google mobile’s buzzing down A1A while people are trying to cross to get to the beach or a Tesla driver sleeping while in self-driving mode? How about a semi tractor trailer truck getting lost on Swinton Ave.?

This isn’t the first time an Uber robo car has been involved in a crash. One of Uber’s autonomous cars failed to stop at a stoplight and zoomed through a crosswalk while in ‘self driving mode’ in San Francisco. Apparently Uber took it’s show ‘on the road’ and ended up in Arizona because the California Department of Motor Vehicles revoked registrations for Uber’s self-driving cars. Apparently the governor of Arizona did not require the company to seek autonomous testing permits like California did. The California DMV sent Uber a cease and desist order back in December of 2016.

Google’s famed self-driving cars have also been involved in a number of accidents, though to be fair, the accidents were the fault of other drivers in most cases. The bottom line is that car companies working on self-driving technology are ‘bumping into’ a lot of challenges including issues with cameras, sensors, light-detecting and radar systems that need to guide cars without human control. There is also the ‘human factor’ – the fact that humans are not and will never be robots – so we’ll tend to make mistakes – perhaps much more frequently than our robot counterparts – like this most recent accident in Tempe proved.

Is Delray Beach ready for robo-cars? We’d love to hear your thoughts!

Previous Article: Motorcyclist Dies in Delray Beach After Crash with Mercedes Benz
Next Article What State Has the Most Motorcycle Deaths?